This AAR is a playtest for my first scenario in a small campaign that is inspered by the TV show Strike Back (season 2-5). The rules are the latest Chain Reaction from 2 Hour Wargames

The mission for the two operatives is rather simple; enter the hotel, go to the second floor, locate room 201 and search it for intelligence about an elusive terrorist. After this is done, exit the hotel through the front entrance again.

Accomplishing these two objectives will give 2 and 1 mission points (MP) respectively.
It is expected that there is very little enemy activity so no body armor or heavy weapons is needed for this mission. Civic clothings and pistols only.

As I don't have any terrain that matches I put together what I have assembled of the Battle Systems Scifi Terrain and had a go at it (not that much cover in general). The TAU's made it up for the possible foreign agents and the green pyramid thingys are PEF markers.

I will also be referring to both the scenario and my campaign rules which will remain on my computer until they both are done. Questions are of course more than welcome! 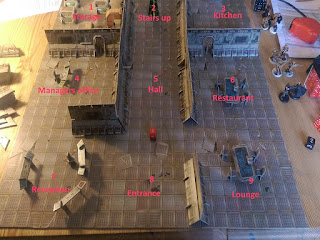 My operatives start at the entrance and rolled for PEF location as well. My scenario states that only 1 PEF is present on the ground floor.

I rolled for the PEF side (red dice) and rolled a 2 for PEF placement on the ground floor. Section 2 it is then. That is the staircase leading up. With no interveening terrain we would roll for In Sight right away. 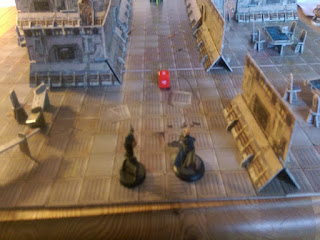 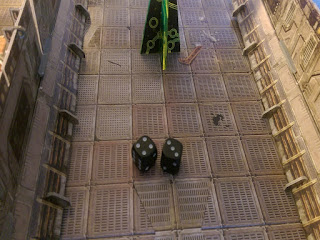 Moving to my own PEF resolution table I roll a 1 for a REP 5 foreign agent with a machine pistol. Obviously the leader of the foreign agents.

After I place him on the table we roll In Sight. Each side rolls the amount of dice that they have in REP so both sides roll 5 dice.

My operatives wins. As we had just entered the hotel and the agent was at the other end of the hotel up on the stairs and no pistols was out yet I deemed that we would just move forward towards the stairs. At this point I decided that we should be within 12" inches order to see that the opponent was carrying firearms.

I decided to fast move with the team, aiming to get to the second floor fast.
Two 5's meant that both operatives would move 16" (4" per passed dice) 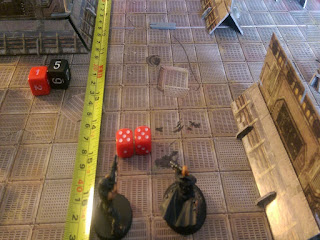 The grey thingy on the floor indicates where the new In Sight test would be triggered due to both sides being aware that the other teams was armed. 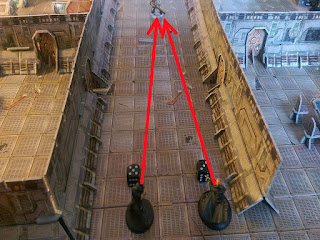 After moving into in sight range, the grey thing now indicates how much the operatives have left on their move.
I rolled a new In Sight test:
The agent scored 2,2,4,4 and 6 for 2 successes
The operatives scored 1,2,3,4 and 6 for 3 successes. The operatives get to fire first.
I rolled a 5 and a 3 (both carrying pistols only). Operative A hit the agent with a total of 10, while the other missed with a total of 8 (due to fast moving)
I rolled a 3 on the ranged damage table. This wasn't equal to the targets REP or higher so I only got a duck back result. As there was no cover whatsoever on near the agent on this floor, I ruled that his obvious move would be to flee upwards to the first floor, in effect moving him out of sight. 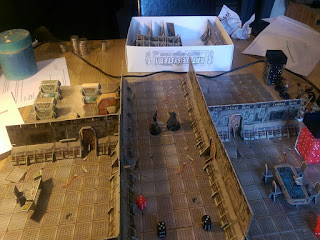 As he went completely out of sight I deemed him to become an extra PEF on the first floor (there is only supposed to be on PEF on the first floor) I rolled for the Agent leader and got a 1 thus placing him in section 1 (room 105) next to the stairs.. All good as it fits with the story. The other PEF is rolled for and I get a 6 which equals section 6 and room 104) 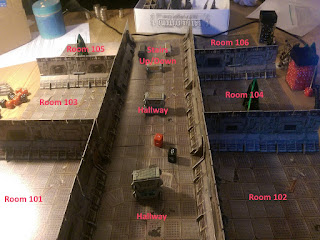 TURN 3
My Operatives are still on the ground floor so I roll for activation
FOREIGN AGENTS : 3
OPERATIVES : 6
Ouch... I win, but have no REP 6 or higher, so the PEFS get to move. A 3 on the activation roll means that they move one section counter clockwise. First PEF moves to room 103 (section 4) and the other moves to room 106 (section 3) next to the stairs. 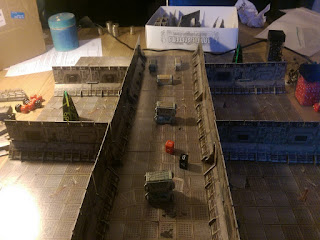 TURN 4
FOREIGN AGENTS : 5
OPERATIVES : 3
Luckily the PEFs won't do anything as they rolled a 5 and they are only REP 4 (the agent leader will become a 5 again when he is resolved)
As the fastmove pretty much ruined my shooting before I decide to just move them up normally to the next floor, no PEFs in sight. I decide that they now want to clear the floor before moving up to the target room and thus they will split up and search one side of the rooms each. Best not to have any surprises coming from below when we move further up the hotel. 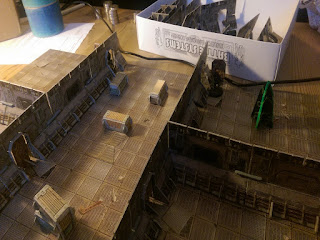 TURN 5
Next turn yields a double 2 so I reroll.

He rolls 2d6 and gets 4,4 and opens the door and sees the empty room.

Operative B does the same, rolls 2d6 and gets 1,4 also opening the door. CONTACT!!
I roll a 5 and a 1 vs the PEFs REP 4, passing only one dice. Nothing here PHEW, but the next PEF will be resolved with 3d6 as per the normal resolution table in CR. Or not.... I decide that the next PEF will auto resolve to the leader so Operative A may be in for a suprise in a moment.

Now the PEF moves, a 3 on the activation dice means one section move counter clockwise so he moves to room 101 (section 7) 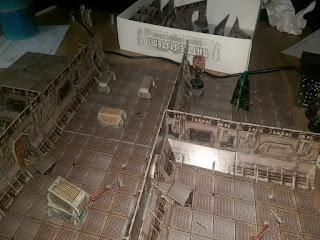 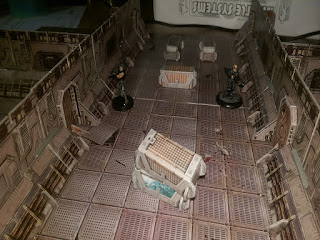 TURN 7
FOREIGN AGENTS : 1
OPERATIVES : 2
I go first again, once more Operative A takes the lead moving into the hallway followed by Operative B. Nothing more happens.
(forgot to move the PEF - DOH!) 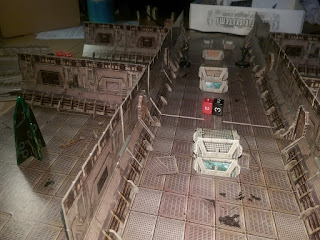 FOREIGN AGENTS : 5
OPERATIVES : 2
PEF goes first, once more counter clockwise, which means he will move out into the hallway in sight of Operative A. The pillars blocks LOS to Operative B.
Operatives rolls 1,2,2, 5 and 6 for 3 successes, Agent rolls 1,1,3,5 and 6 for 3 successes. As the Agent is moving he needs to have more successes than my Operatives so Operative A wins and fires at the agent. An abysmal 2 gives me 7 total (REP + dice) for a miss. The agent must take a recieved fire test.
A roll of 1 + 5 passes the test. He is not outgunned so he returns fire. A machine pistol has a target of 3 so I roll 3 dice and add it to his REP: 3,3 and 4 for two 8 and a 9. 3 hits on my fine operative :(, I roll for damage getting a 2 and two 5's meaning I have one Duck Back and two Out Of the Fight. Time for some star power... I roll my 5d6 (1 for each REP) and gets 2,3,5,5 and 6. 1-3 means reduce damage one level, so my 2 and 3 reduces the OOF to Duck Back and Operative A throws him self forward to get some cover from the pillar. The two 5's I don't need but I retain the dice. The lone 6 means that the damage stays as with 4-5, but the dice is lost. Operative A is now down to 4 star dice for the remainder of the game.
My turn! Operative A moves to the corner of the pillar, triggering a new In Sight test

Operative A wins it hands down and fires back with a 4, getting 9 on the ranged combat table - a HIT! A dice is rolled for damage and I get a 6 which is Obviously Dead!!
Search downed enemey 2d6 vs rep
2 : find intel - one extra MP
0-1 : nothing here

I roll two dice to search him and find some interesting intel, worth 1 extra point of MP. The intel is not used in the campaign but the extra MP will be ;)
There are no PEFs left on this floor so they quickly clear it and move to the second floor. (which luckily looks the same so I only need to close the doors and place some PEF's)
I roll a 1 and a 4 thus placing them in room 205 and 203 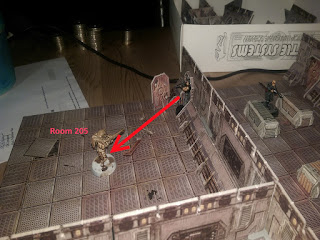 I roll for activation
FOREIGN AGENTS : 2
OPERATIVES : 4
I win and move Operative A to the door of room 205 and tries to open it. He passes one dice (5,6) and rerolls for a 2,3 which opens the door to a PEF! I pass 2 dice (2,3) and rolls on my mission table (UNKNOWN AGENTS). A 4 means I get a REP 4 agent with a pistol, nice not to be out-gunned this time.
In Sight check begins.

I have more successes (3 vs 2) so I win, and Operative A fires and scores a 5 for a nice fine 10 on the ranged combat table. A hit.. A damage roll of 4 gives me an out of the fight result. Operative A moves in to finish him off.
Operative B moves up to the door on the other side and attempts to open it. A 1 and 6 means only one dice passed, but reroll. This time a 4 and 5 meaning the door opens to reveal an empty room.
PEF's turn.. a 2 on the activation dice means I should move it 1 section clockwise.. That would be through the wall where Operative A is, so I decide to move him out in to the hallway. If no operatives had been in room 205, I would have moved it there instead. 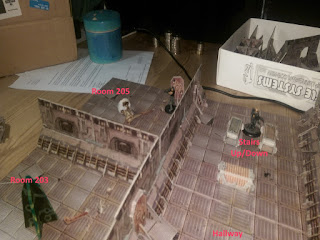 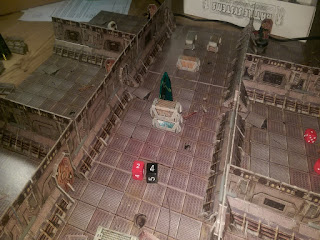 FOREIGN AGENTS : 6
OPERATIVES : 5
PEFs move first, into room 205 (sneaky bastard, crossing the hallway while my operatives are in the other rooms.)
My turn, Operative A moves to the downed agent taking him out and rolling for intel, passing 2 dice (5,5)... 1 MP more in the bag.
Operative B  moves out into the hallway and moves to room 205. 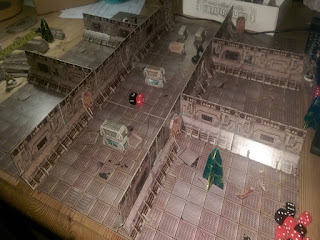 FOREIGN AGENTS : 4
OPERATIVES : 3
The agent wins and a 4 means moving clockwise so on to room 202 (section 9).
Operative B moves to the door and tries to open it, passing with 2 dice (1,4)
Operative A leaves room 205 and moves out into the hallway to get to the next room. 203 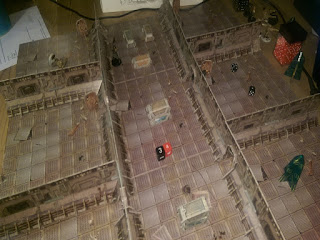 FOREIGN AGENTS : 6
OPERATIVES : 4
PEF moves first, a 6 means moving into the hallway, but there is no LOS to Operative A so nothing happens.
Operative A moves forward to room 203 which triggers the PEF resolution. A roll of 5 and 6 vs PEF REP 4 means that I passed 0 dice. Nothing was there. Had I not had any encounters this would have meant I passed 2d6 instead.

As there are no PEF's left my operatives can search the floor without interuption, thus securing the information that was the primary objective. They will also be able to exit the hotel through the front lobby which was the secondary objective.

The mission was a success!!

Primary objective gives me 2 MP, the secondary gives me another 1 MP and my two successful searches yielded another 2 MP's for a total of 5 MP. 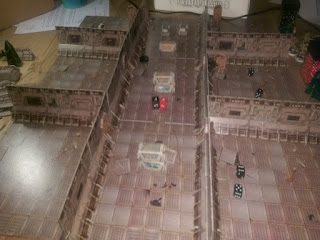