After more or less having turned my back on THW due to the not so clearly written rules I stumbled upon the latest incarnation - CR3. While still having a few unclear things here and there, the rules have gotten a serious overhaul.

Reading through the rules and wanting to play around with some modern warfare I decided to by 5150 Star Army. A bit premature as I only had some US forces and some Taleban forces and wanted to field truly modern troops on both sides. Nevertheless I decided to get into the action right away and do a few games of CR3 with my son before we would move up to 5150:SA.

My son got a small group of US forces while I got a group of... well US forces - proxying as Russians ;) Location.. Northern Afghanistan in a not so distant future. Mother Russia got her self together and once more taken control of the former Soviet states. And naturally Afghanistan was once again a target for colonization.

I decided that we should try a patrol like scenario as I didn't had much time to prepare (work decided to call upon me this very sunday.. sigh).

So.. first the troops... (names are likely to change once we have time to prepare!)

Setup
I placed two colored stones in each of the 9 sectors. Having our Leaders next to a stone for a full turn would give us the stone for our side, indicating that the sector had been patroled. I was to get the red ones (of course) while my son was to get the green ones.

The game
I quickly moved my forces forward with Igor going to the first red stone and the rest of the Spetsnaz team fanning out to secure the area. 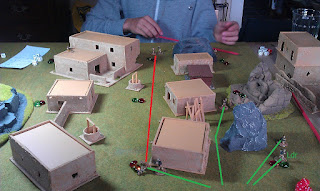 Soon I encountered the first US forces and was pushed back on my right flank, while taking the first casualty in my left flank. 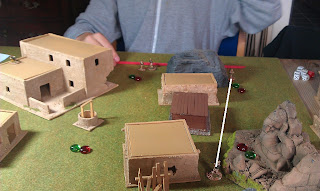 In the center the US force pressed forward and occupied the house my right flank had sought cover behind. A lucky shot from within the house got my second spetsnaz out of the fight just in front of Igor... who didn't care.. More troops can be had.. and apparently he wasn't good enough to be a spetsnaz! 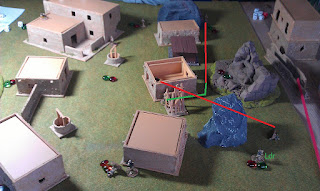 On my left flank another spetsnaz moved forward to haul his downed comrade to saftety. Instantly he came under fire from Sniper "Joe" on the rooftop.. But some lucky return fire from him killed the sniper! 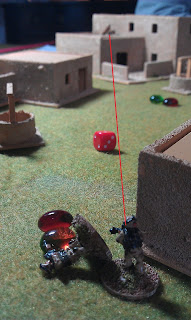 The house in the center was still a hot zone with US forces crawling all over (well - all one of them). Nevertheless my fearless spetsnaz decided to take revenge on the soldier that shot at him while he passed the hole in the wall and lobbed a grenade into the house killing the marine inside. 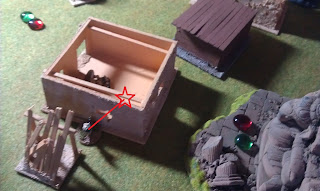 After killing the sniper, my left spetsnaz returned to the rear with his downed comrade and turning to get back in the action was shot down by an advancing marine. Another one of my troops Out of the fight.. sigh :(

The marine pressed forward and took my grenade lobbing spetsnaz out and pressing further ahead. Another marine and Sgt Jason pushed forward to secure the fallen russian, whisking him away to imprisonment.

Meanwhile Igor decided to bring home the fallen spetsnaz in front of him, moving to the rear as well. 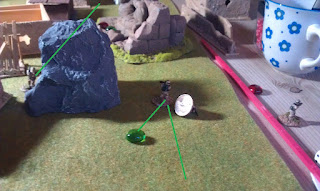 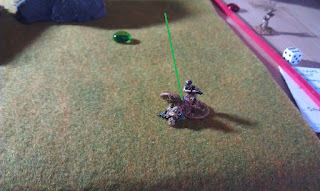 And then moves to towards the last fallen spetsnaz and retrieves him as well... Once retrieved he kills the sneaky marine that has caused so much trouble. 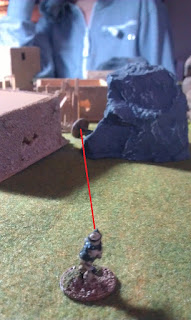 Besides the fact that my son captured one of my spetsnaz he got away with a bloody nose. Two killed marines for him and all my Out of the fight returned to full service after the game.

We decided that the next scenario would be about me trying to rescue the captured spetsnaz...

Will bring that online soon...