Trying to whip up a few characters for my upcoming mini campaign with my son and one of my friends..
Once the minis are finished I will replace the pictures with pictures of my own painted stuff.. But for now - click on the piccies to buy some for your self ;) (nb:pictures are used without permission...)

Here is the first character: 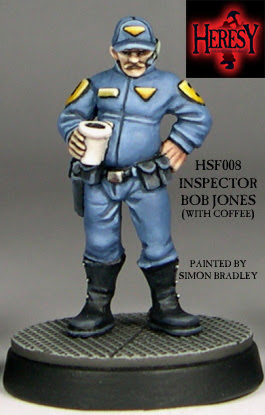 Heresy Miniture
Name : Edward Columbo - Station Chief Constable
REP : 4
Fitness : 2
People : 3
Savvy : 4
Science : 0
Gender : Male
Class : Police
Motivation : Duty/Profit (??)
Attributes : Coward,Hard as Nails
Profession   : LE1 - Police Commissioner (G3 - Level 2, People skill)
Items : Big Ass Pistol, LR Com-Link (works in 99% of Cygnus),                     120 Items in bank
Enhancement : None
Bio :
Edward is an ex-military, ex-street cop that got assigned to the distant outpost station of Cygnus after accusations of taking bribes. In a few years he worked his way up to second in command, and after the old Station Chief died, Edward was assigned to the post. Over the years it has more or less become his space station and he rules it as his own small kingdom.
Albeit still a police officer and all, there is a rumor going that he does involve him self in shadier trades at times.


And the second one: 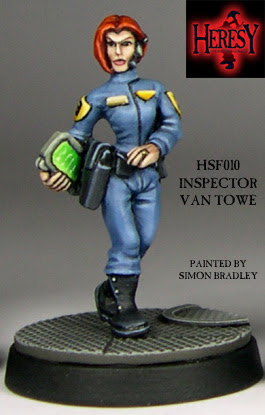